Menu
Join our feeds to automatically receive the latest headlines, news, and information formatted for your club's website or news reader.

As the cryptocurrency market reels from the bloodbath of this week (looking at you, Terra), Cointext thought it would be prudent to take a step back and assess how far it has come.

Perhaps no sector has seen as much progress as NFTs. By May 1st, there had been  $37 billion sent to NFT marketplaces so far this year. That already places it on the brink of overtaking the entire total from 2021, which landed at $41 billion, according to a recent study by Chainalysis.

Extrapolating this forward points to projected NFT volume of $111 billion in 2022, however, the future of this relatively new industry is still unclear and far from predictable – not to mention the fallout of the market turmoil of this week that may impact volume going forward.

The last week has not been an easy one for the NFT market, which can clearly be seen with Yuga NFTs, which have seen a massive 31 percent drop, while the industry’s market cap has taken a serious beating, dropping to $19.5 billion.

Chainalysis’s report on the NFT market comes just days after the launch of Coinbase’s NFT marketplace. So far, however, the activity on the Coinbase marketplace has been hugely disappointing. On the first trading day, only 150 transactions took place on Coinbase’s platform for a total volume of approximately USD 75,000. These are not good results for a billion-dollar company like Coinbase, although they will probably push hard to promote the marketplace.

All in all, the NFT market remains a special phenomenon. Few expected this to become a multi-billion dollar business, but we have now reached that point. However, that does not mean anything about the sustainability of the market. Only time can tell to what extent interest in NFTs remains at this level.

Looking at the market from a seven-day perspective, most collections have lost more than 50 percent of their value. Aside from the Yuga NFTs housed on Ethereum, more than eight blockchains occupying the top 10 positions have suffered massive losses.

The number of new wallets making purchases has also taken a big dent since this month. However, these moves have not caused analysts to backtrack on their predictions about the digital art market.

Big spikes in value sent so far this year occurred around February – when OpenSea finally saw meaningful competition in the form of LooksRare – and also April, due to the Otherside mint launched by Bored Ape Yacht Club founders Yuga Labs.

It’s only a year since Bored Ape Yacht Club was launched, but they have become the flagship collection, boasting a floor price of 99 ETH (still $210,000 even after the downturn of the last few days). 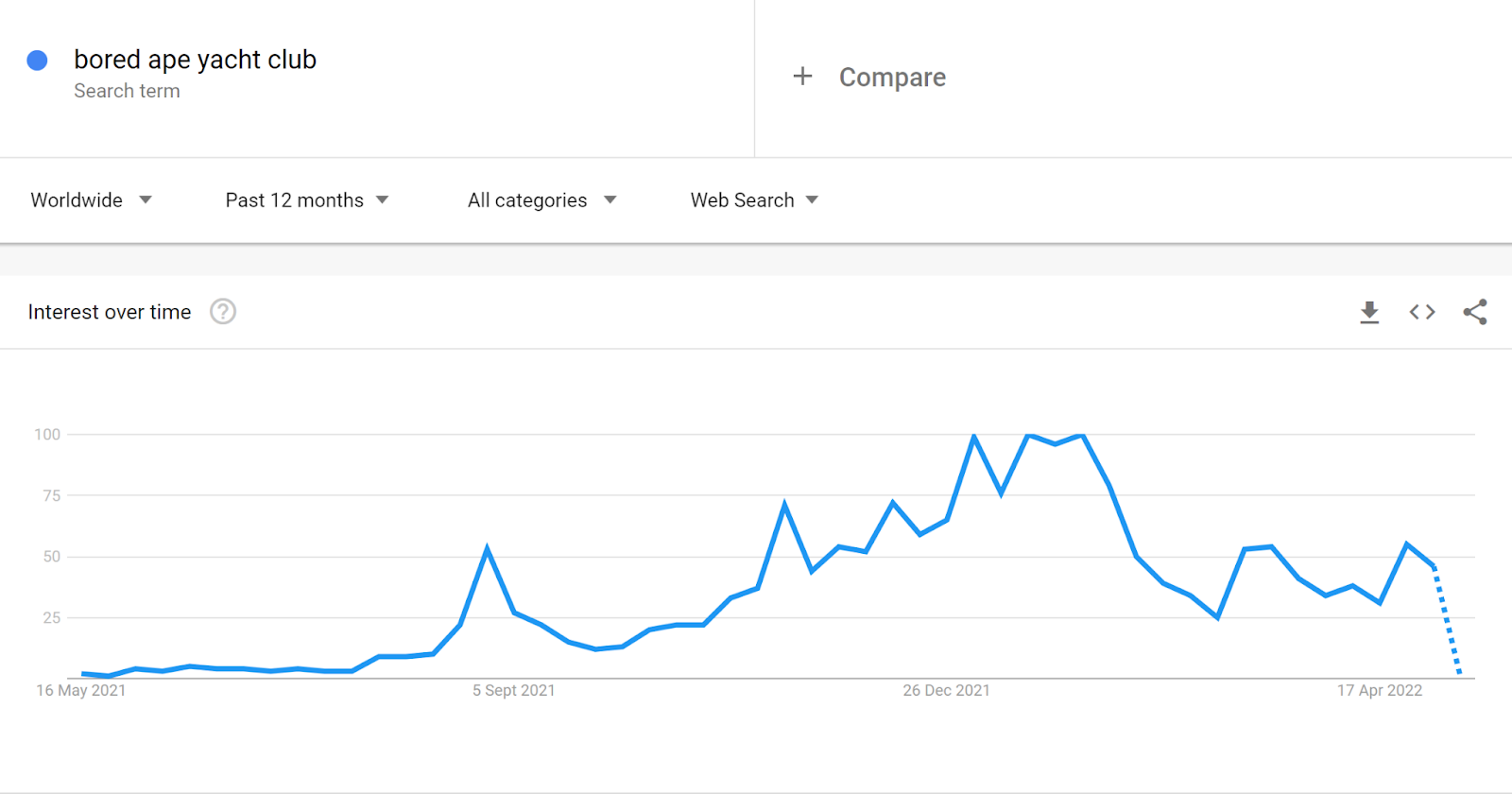 In looking at the all-time rankings on OpenSea, the dominance of the BAYC is clear. While CryptoPunks are still number one in terms of all-time volume, the founder of BAYC, Yuga Labs, owns the IP rights to this collection.

The Otherside project is especially intriguing, as it is an attempt by Yuga Labs to launch its own metaverse, with collectors striving to buy “deeds” to “land” in the virtual world.

The intrigue of this project can be seen in two additional ways, beyond the staggering volume shown in the above picture. First is the gas war that transpired on Ethereum during the mint, with transaction fees rising to a scarcely believable four figures. Secondly, the price action of ApeCoin, which was required to purchase the NFTs, told a story – it was bid the whole way up and then crashed down 50 percent post-mint.

The below graph from Kaiko shows that the funding rates also turned negative for ApeCoin just after the announcement that the NFT investors would need the coin to participate. This suggests that traders were shorting the coin and anticipating it would fall post-annoucncement. Of course, as the orange price line also shows, this turned out to be a very prescient move (despite a brief rebound thanks to a tweet from Elon Musk). 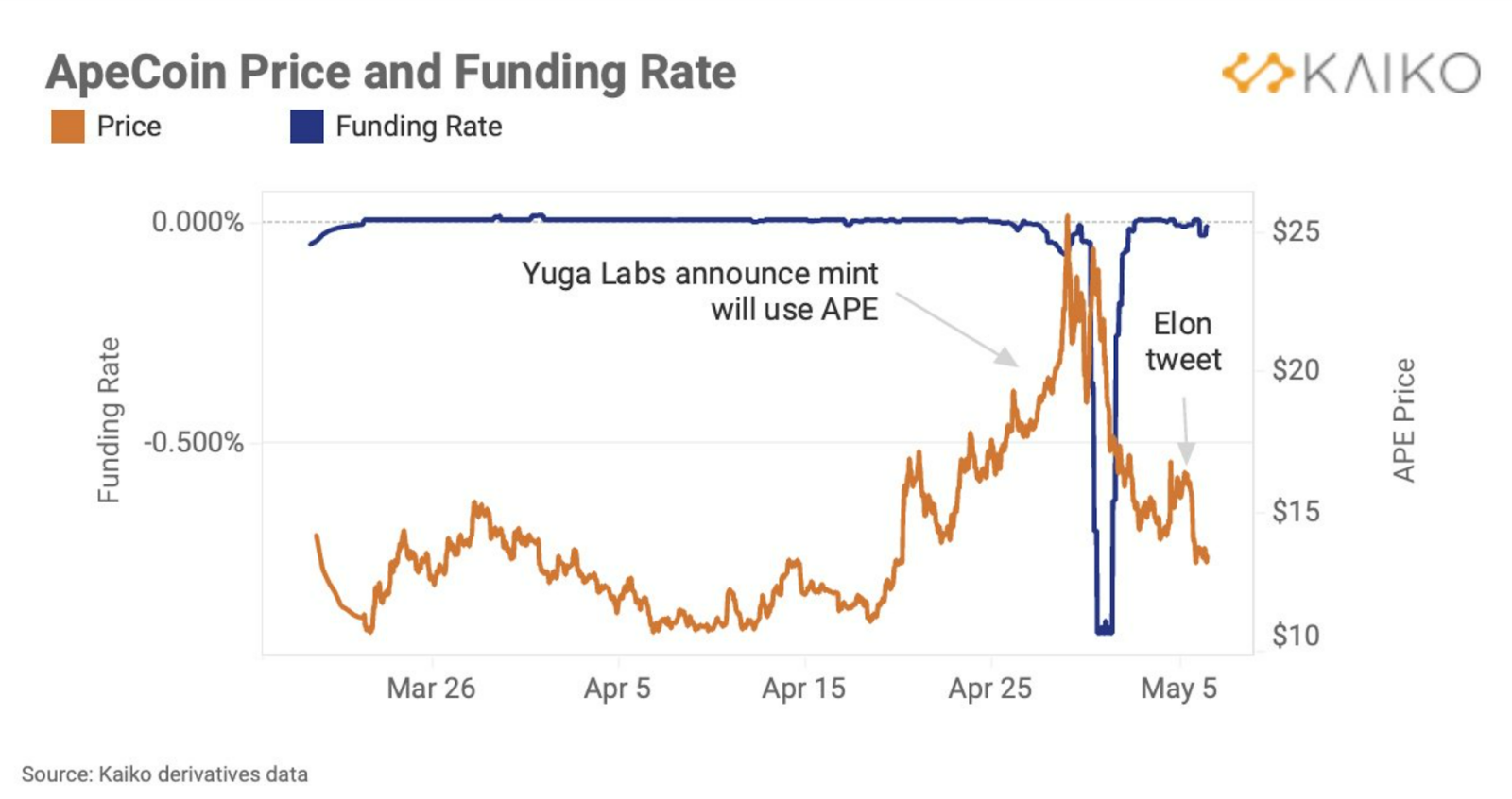 As discussed above, extrapolating the $37 billion of NFT volume for the first four months of the year, the forecast comes in at $111 billion for the year. Of course, given the market crash of the last few days, whether a straight extrapolation is reasonable is another matter entirely.

For context, the entire crypto market held $14 trillion of trading volume in 2021, with Bitcoin responsible for $9.5 trillion of that figure. That means the rest of the market summed to $4.5 trillion.

If NFTs do hit $111 billion this year, that therefore means it would still only represent a relatively low 2.5 percent chunk of non-Bitcoin related trading volume. So, perhaps there really is more room to grow for NFTs, especially given the extremely short time frame that they have been around for.

Multicote is suitable for content producers at all levels, whether that’s for personal bloggers or online magazine websites.

No comments to show.
Shares